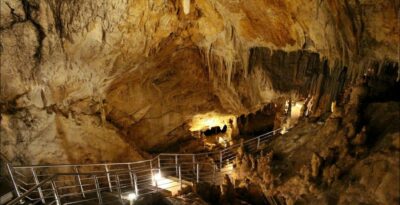 A fascinating cave to visit in Attica

Meet the Kutuki Cave in Paiania

The Cave and its history

The Koutuki Cave is the largest known as one of the most beautiful caves of Attica. It is located at an altitude of 510 m. on the eastern outskirts of the mountainous volume of Ymittos in Paiania, about 35 km. from Athens. Its discovery was made by accident in 1926 and its interior was first explored two years later. The first explorer of the Cave is considered the journalist D. Hatzopoulos, who, with the help of the local residents, made the first descent from the natural entrance of the cave, where previously a goat had fallen. Many visits followed by various groups of nature lovers, most notably that of Giannis and Anna Petrohilos of the Hellenic Speleological Society in 1954, which also made its mapping.

Thanks to its rich stone decoration, Koutuki was made a tourist spot in the early 60s by the Hellenic Tourism Organization. In 2000 the use of the site was attributed to the Ministry of Culture and later was renovated. So today the public can enjoy a tour there.

What you will see in the Cave

The unique cave hall, measuring about 60 x 60 m, is divided into smaller ones because of the stone-like remains that have developed along the branches (cracks of the rock due to masonic phenomena) of the mother rock. The rich lithomatic decoration, with the variety of stalactite formations and colors due to the effect of oxides, creates an evocative atmosphere. Today the access to the cave is made by an artificial tunnel, 17 meters long built to facilitate visitors, and the tourist route is 350 meters long. The original natural entrance is located on the roof of the cave.

The Cave is part of the underground karstic system of Ymittos in Attica. Its creation is due to the high solubility of limestone in the rainwater. This is also the primary cause of the cave’s birth. Thus, most of the Cave of Paiania has been created, with a rich lithomatic decoration, with varieties of stalactite formations and evocative atmosphere, elements that led to the creation of various names in the halls, the extols, the squares and the corridors of the cave. The “Olympic Torch” can be distinguished, “Vomos”, “Corals”, a “Armonium”, and the “Red Waterfall” from the oxides of the iron that penetrate the interior of the cave along with the water from the surface of the ground.

A different trip to Attica

I’m sure by visiting The Kutuki Cave you know you’ll had a different experience. It is the most beautiful cave in Attica and one of the most beautiful in Greece. You will reach as far as Paiania and you will see a beautiful cave with impressive decoration, large columns that one thinks are stone waterfalls, amazing stalactites and stalagmites that create a magical atmosphere.