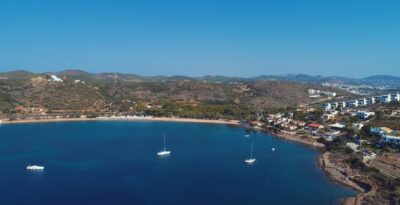 Attica is full of small and large beaches other better known and others less. Some, in fact, have a history behind them that we don’t know and don’t even imagine. And it makes sense when you consider the centuries-old history of Attica and all the events that have happened from time to time in the region. One such case is punta zeza beach in Attica in the area of Lavrio. There is actually a sunken greek city. Something few people know…

Punta Zeza is one of the most famous beaches in Attica and specifically in the area of Lavrio. The inhabitants of the area choose it for its clear waters, the fluffy sand and the natural shade that offers. At the back side of it, after all, there are armyria under which you can lay your towel and enjoy a relaxed swim in the clear waters of the sand.
Its sandy coastline is also ideal for families with children that can play safely. If you prefer something more organized , Punta Zeza beach in Attica has such a place that you can find umbrellas and sunbeds.

In general, however, wherever you prefer to take your swim, you will think you are on an island with the best company, the sun and the sea.

Along the coastline of Greece, there are many well-known underwater archaeological sites in various places. One of them is also in the specific area of Lavrio. The settlement of Punta Zeza is in fact identified as the “Strait of Salaminia”. This location already refers to inscriptions from 363 BC in the Ancient Agora of Athens. According to the historical records, therefore, this settlement was most likely extended to the wider area of the hill of the settlement of Punta Zeza, ending smoothly towards the sea. So the excavations showed something very impressive. An important part is now under the sea. It is in the wider area where Punta Zeza beach is located. The coastal part of the settlement is actually now covered by the sea due to the rise of its sea level.

Walls of several buildings still 40 cm high have also been identified on the north and east side of the sea section. At about 25 meters away from the coast and at a depth of almost two meters they have been located remnants of a building that was believed to be of public use.

What is certain is that if you find yourself in Punta Zeza you will enjoy your swim knowing that somewhere under your feet lies a submerged city with a rich history in the depths of the centuries. See where Punta Zeza beach is located in Attica and how to get there HERE. External photography source: Google Maps