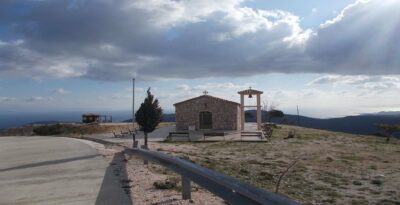 Merenda: a little-known mountain in Attica

One hour from the center of Athens

There are so many hidden secrets next to us and we don’t know them. Every time we explore Attica and Greece we discover them with joy and we find out how beautiful a country we live in and how much diversity it has. Many of these hidden secrets are found in Attica. One of them is Merenda.

What is Mount Merenda and where it name came from.

Merenda is an unknown and small mountain in Attica which is located in the southern part of the prefecture, between the settlements markopoulo mesogaias, Kalyvia Thorikos, Porto Rafti and Kouvaras. The etymology of the word Merenta (or Merreda, as various authors argue), is not entirely verified. Its name, according to most researchers, is said to be due to corruption of the name of the adjacent ancient Athenian municipality of Myrrinounda. Myrrinos or Myrrinon was called the place because it had many myrrines or myrsines (myrtles), such as Marathon because it had a lot of maratha,

Mount Mereda has a maximum altitude of 613 meters and west is connected to The Mount Panius. It is about a small rocky mountain, with very steep slopes. On it are many small ravines – ravines and inaccessible louks called hoons. The internal road Markopoulou – Kouvara and the diaselo, at a height of 207 meters near the rock Velaturi, separates Mereda from its eastern extensions,and some other separate heights.

In this small mountain in Attica, near today’s Markopoulo, is the locattion of the elegant church of the Assumption of the Virgin Mary. It is a one-room arched temple, which succeeded a three-aisled basilica of the early Christian years. From the oldest temple are obvious typographical elements of the later one, such as the visible parts of the lateral climes that were previously revealed.

If you like walking, hiking and climbing you should know that smoother ascents are the southeastern side of the mountain. More laborious but quite interesting are from the north side e.g. from the ravine of the quarries or from the lone church of Panagia.

The stop that you have to make in East Attica

When you start exploring Mount Mereda it is a good opportunity to get to know the mesogia as a whole. Your first stop must definitely be the kakia thalassa in Keratea. The beach is located to the left of Lavrio Avenue and is known for its clear waters. It pops up between two mountains, which create a very beautiful landscape, while on one side there is a vertical rock that is used for climbing.

Attica has many unknown beauties. All that’s left is to plan it for her exploration. Take the car and make sort or longer journeys to get to know its hidden corners…