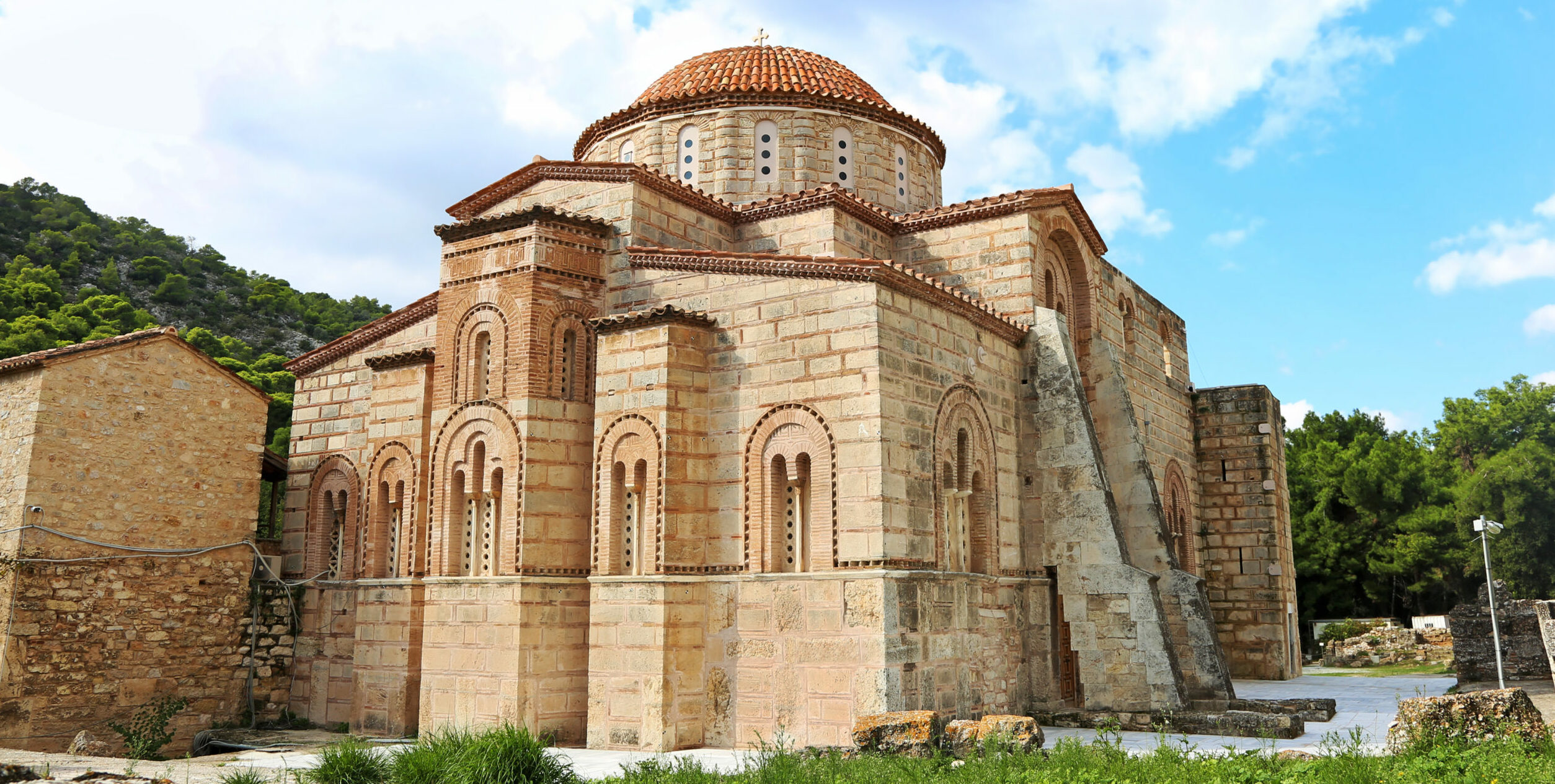 Athens and Attica in general are characterized for its rich history and religious wealth. In all areas you will meet churches and monasteries many of which have centuries history. Some of the monasteries and temples have even stood out either for their architecture or for their history. One of them is the Monastery of Dafni, which stands out not only in Greece but also throughout the Mediterranean.

The history of the Monastery

The Monastery of Dafni is located in Heidari. Built on the outskirts of The pikilou Mountain, on Athens Avenue, on the road to Athens you will need to do just 11 km from the city center to visit it. The temple is built in the place where there was the Sanctuary of Apollo in Dafni. From what we know about the story. The monastery was founded in the 6th century. From the Sanctuary of Apollo which had been destroyed by the Goths there were some columns of Ionic rhythm which were used again. Today only one has been rescued, while the rest have been transferred to London by Lord Elgin.
As for the catholic monastery, it dates back to the late 11th century and belongs to the architectural type of the octagonal cruciform temple. It is really an impressive construction while there are preserved mosaics, the best preserved of the first period. The strict and priestly depiction of The Pantokrator Christ inside the dome is the main feature of the Macedonian era.

In 1205 the Monastery of Dafni was looted by the Crusaders. It was then that Otto de la Ross, Duke of Athens, that gave it to the Cisterkian monks. In this period of time there are also changes in the appearance of the temple. The French monks rebuilt the exoneration and added among other things a precinct around the monastery. They were eventually expelled by the Turks. Over the centuries, the monastery has been deserted. Restoration work began only in 1888.

The name of the Monastery of Dafni

As far as its name is concerned, it has been linked to the ancient Sanctuary of Daphneos Apollo on which, as we said, it is believed to have been built for . But there are other versions. One of them, then, mentions that it is named after the number of laurels that existed in the area. in fact, that was the reason for the establishment of the ancient Sanctuary.

There is another version which associates it with the Virgin of Daphne in Istanbul. Tradition states that the name as well as the founding of Daphne are related to the queen Daphne. Legend of the time says that Daphne was shipwrecked in the sea of Scaramaga, but was rescued along with twelve barrels full of gold coins. To thank the Virgin Mary, she built in her honor the monastery and all the excess gold coins buried them in seven jars in the monastery’s enclosure.

The Monastery of Dafni, UNESCO Monument

This impressive architecture and the special mosaic decoration of the monastery’s temple make it one of the most outstanding monuments of Byzantine art. Since 1990, it has been a UNESCO World Heritage Site. Both the style and the construction technique of the temple is of excellent quality making it one of the most important Byzantine monuments of the Greek area, comparable to the monumental temples of Istanbul. Unfortunately, however, the 1999 earthquake was severely damaged it

The Monastery of Dafni is a religious monument in Attica, a breath away from the center of Athens that is worth seeing up close.

The Monastery is visited during the following days and hours:

External photography source: From Sp!ros – Project of the one who uploads it, CC BY-SA 4.0