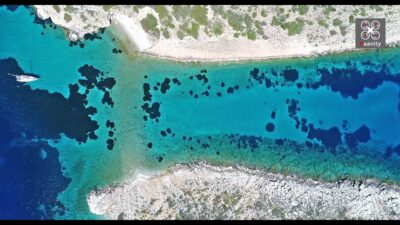 See the stunning images from above

Attica is filled with hidden corners, even exotic destinations that you may not imagine that they exist. Such an exotic destination in Attica, next to us is Kavo-Skili or else the Tselevinia of Poros. This paradise is mainly known to boat owners who choose the area for diving. It is not, after all, easy to approach at this point in any other way.

What makes it stand out are the beautiful turquoise waters and blue lakes reminiscent of tropical countries especially when you see them from above.

Kavo-Skili, the tropical destination in Attica

This special place, which, of course, is not very easily accessible, in the north of the Saronic Gulf, east and south of the Aegean Sea (Argosaronikos region). East of the cape are two islets, skili and spathi, which are often referred to as “Celevinia”. Cape Scyllaio along with Cape Sounio and the island of Agios Georgios Lavreotiki they mark the limits of the Saronic Gulf.

The name Scyllaion in one version comes from Scylli, daughter of the king of the Nisos Megara, whose body washed up in the area. The name Tselevinia is said to be of Arvanian origin and is timed around the 16th century, when the Arvanites of the region were trying to hide from the Turks who pursued them. The Arvanites used the expression “Cellie-veenie” (=becareful come) as a warning when they spotted Turkish ships approaching the area.