The imposing churches of Greece dedicated to Virgin Mary

The 15th of August is also called Little Easter. It is one of the biggest and most important celebrations of Orthodoxy. The Virgin Mary is honored and celebrated throughout Greece. Besides, where in Greece isn’t there a church of Panagia (Virgin Mary)? On the mountain, by the sea, or in the midland. Everywhere churches dedicated to the Virgin Mary have been created and various names have been given to the churches

Some of these churches stand out for their beauty and the spiritualism you feel when you are there. In exploringgreece.tv we present some of them to you…
Panagia Ikosifonissa

It is a monastery with a huge historical tradition. A corner of peace and prayer in Greece. Panagia Ikosifonissa is a monastery built on the north side of Paggaio mountain, at an altitude of up to 750 meters. The image of today may not bear witness to the constant destruction and looting it endured in the past, but this is due to great love and faith. As for the name of the church, according to the prevailing version, the name was given because of the miracle of the icon of the Virgin Mary. According to tradition from the picture shone red palm light. So it was named Ikon Finissousa- Ikon finissa – Ikosifinissa. Today this particular monastery, which is the oldest active in Greece, is for women and there are 23 nuns.

Panagia Ekatontapyliani in Paros is one of the most important temples of Orthodoxy. It is located in Paros, Parikia, a few meters outside the port. It is classified as the largest and most well-preserved early Christian monument in all of Greece. When you are there you will feel awe and overwhelm. Historical descriptions indicate that the original building was the work of the Emperor of Byzantium, The Great Constantine. It is believed that he had carried out the construction of the church in order to fulfill the wish of his mother, st. Helena. The church is known by two names: Ekatontapyliani and Katapoliani. Both names are just as important as they go hand in hand with the history of Istanbul and Agia Sophia.

Perhaps the most famous church dedicated to the Virgin Mary in Greece. Tinos has identified its name with the imposing church dedicated to the Virgin Mary. It is no coincidence that the island is considered the capital of religious tourism in Greece. The church of Panagia Evangelistria in Tinos is essentially dedicated to the sacred icon discovered there in 1823. Tradition says that Sister Pelagia, a young nun from the Holy Monastery of Kechrovoumiou, saw the following vision: the Virgin Mary appeared before her and asked her to find and bring to light a miraculous image that for years had been buried on earth. It is even said that as soon as the image saw the sunlight, a glass cover was created to protect it. 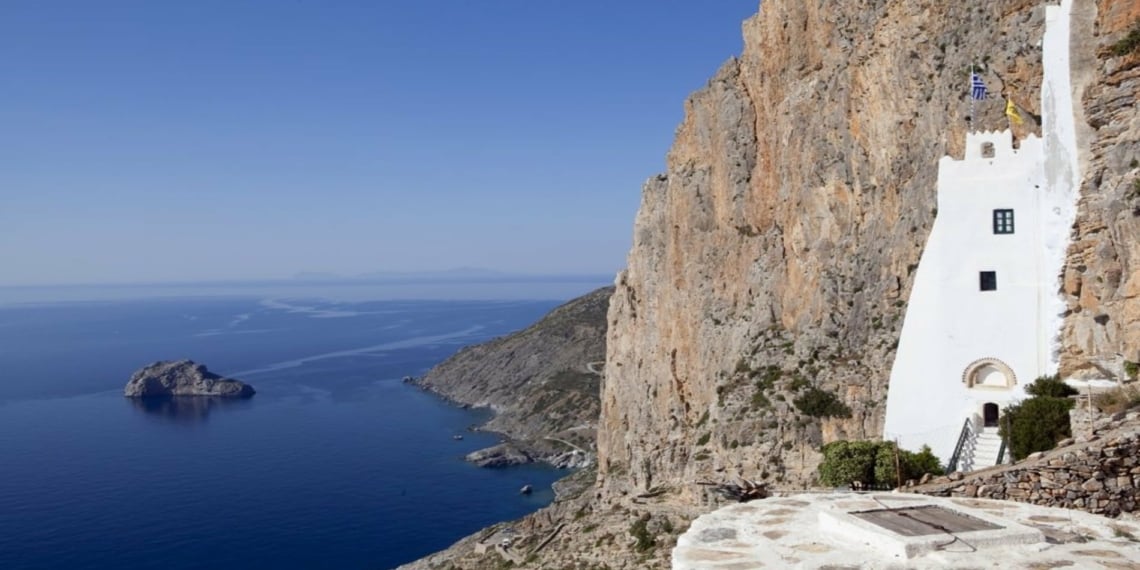 The monastery of Panagia Hozoviotissa is built on the wild mountain peaks of Amorgos and can only awe you. That’s because it seems to be literally hanging by the void. From there you will enjoy a unique view of the endless blue of the Aegean Sea. The monastery was built in 1088 and renovated by the Emperor of Byzantium Alexios Komnenos. According to the legend the location was chosen by the Virgin Mary herself.