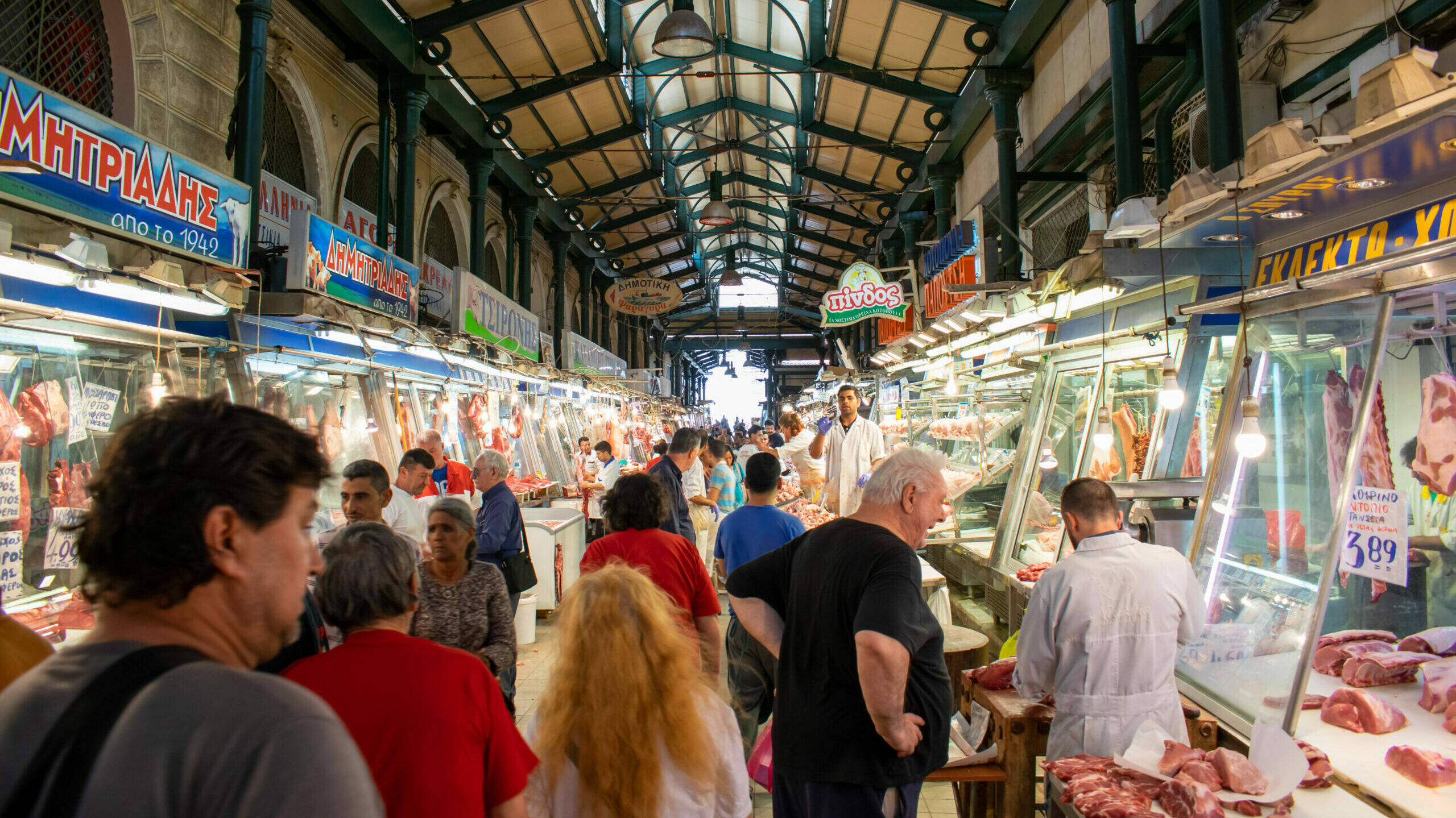 The Varvakeios market: the story behind the “stomach of Athens”

Colors and smells from times of old

Having over 130 years of history, Varvakeios Agora is the meeting point of the Athenians especially on the festive days of the year. The central market of Athens aggregates pictures, colours and smells from the old Athens and takes you to the past in just one visit. On the Eve of the holidays, Varvakeios Agora looks from afar like a big human carpet that sells and buys goods.

The Varvakeios Agora and its history

The central market of Athens is named after the national benefactor and outlawed by the Ottomans, Ioannis Varvakis of Psara Island (one of the most historic and utterly destroyed places by the Ottomans during the Greek Revolution). In his will, Varvakis left most of his property, which was in a Russian bank, to the Greek State. In his will, he wanted the establishment of a Lyceum, which was built and successfully finished in 1859. The Market was close to Lyceum. For this reason, it was named “Varvakeios”.

However, the Market went through difficulties before reaching to its completion. While itσ construction began in 1878, it was completed in late 1886. In the meantime, a fire broke out on August 8 and 9, of 1884. Since then, it has been operating continuously. What if it went through bombings, earthquakes and disasters. It is there to remind us of the old Athens in the most special way.

One of its characteristics is that in 1944 the allies bombed Piraeus and the civilians fled to the centre of Athens and to Varvakeios Agora. It was then that Varvakeion Lyceum was used as a hospital. Since 1942, a ration was distributed on its ground floor. The building was demolished after it was destroyed in the “December riots” (riots that took place between December of 1944 and January 1945 between the National Liberation Army and the British army, in Athens).

After the earthquake of 1880 in the area of Varvakeios Agora at a depth of about 60 cm, a statue of the goddess Athena on a pedestal was discovered. It is believed that the Athena of Varvakeios is, in a smaller dimension, the very image copy of the golde-ivory Athena Statue of the Parthenon, which was carved during the Roman wars.

During the dictatorship, in fact, the Varvakeios Agora was in danger of being demolished. There was an intention to build a high-rise building in its place. Finally, these plans were never carried out. However, it had to be renovated a few times over the years.

Today in the “Stomach of Athens”, at 42 Athinas Street, one can find whatever one can imagine for his diet. The building today houses the fish market, the meat market and the vegetable market in the area where there was the Varvakeio Lyceum opposite the Market building. Walking through the buzzing and crowded market of Athens you will find all kinds of meat and fresh fish on its stalls. You can pick fruit and vegetables. You will be introduced to the magical world of spices with aromas and flavours that travel you to exotic places. You will choose and taste among nuts from every corner of Greece. And all of this in many kinds and excellent prices. It is of no coincidence that over 80% of the customers are regular frequenters. They know where they’re going shopping. They know which stalls to trust. The seller is their friend who will tell them what to buy and if there are new buying opportunities. In Varvakeios, you don’t just go shopping. You’re going there in order to see, smell, taste. To experience the Athens of the ’70s. Back to the time when Varvakeios Agora was the one that filled with food the tables of most Athenians.

If you go to Varvakeios:

1. Dare to buy some of the strange and special spices sold on the stalls. Ask the vendors which one is combined to which food. A new world of flavours will open up in front of you.

2. After your purchases, you can sit at one of the market’s cookhouses. Eat some tasters and drink some wine. Most of the cookhouses have many years of history and will definitely offer you a different dining experience. Patsas. Of course, it’s the trademark of the Market, but if you don’t like it, you can find the dish that suits your preferences.