Gone forever: the old neighborhood under the Acropolis

How the decision to demolish entire city blocks was made

Having so many centuries of history it makes sense that Athens has undergone a lot of changes. Some of its neighborhoods still remind us of the old days. The houses, the town-squares and even some shops. But there are other neighborhoods that no longer exist . This is the case with a neighborhood that used to exist under the Acropolis as well. It used to be the Vrysaki neighborhood.

The history of the neighborhood that was demolished

Walking opposite Dioscurus lower, the ones at Adrianou street, there is a small alley. You may even have not noticed it. It’s called Vrysaki Street and its name is not accidental. Going up this alley the “back” of Attalus Arcade and the rest of the Ancient Agora is on your right side. On the left, after a few steps, you will see a beautiful neoclassical building. There used to be another neighborhood at this place once.

The Vrysaki neighborhood. Theneighborhood, which was located at the point where today the archaeological site of Athens extends, between Thissin district,the Ancient and the Roman Agora. Houses, taverns, convinience stores. Even the Trial Court was there.

But all these disappeared for the Ancient Agora to jump out. A very difficult and important project. It was one of the largest excavations of the 20th century. The excavations began in 1931 and were entrusted to the American Archaeological School since the Greek state did not have the resources for the needed expropriations at the time. To achieve this, the demolition of entire building blocks was approved. Gradually through the demolitions that took place, the archaeological site we know today was revealed. The Vrysaki neighborhood no longer exists. Nor the houses and shops of the approximately 300 people who lived there. 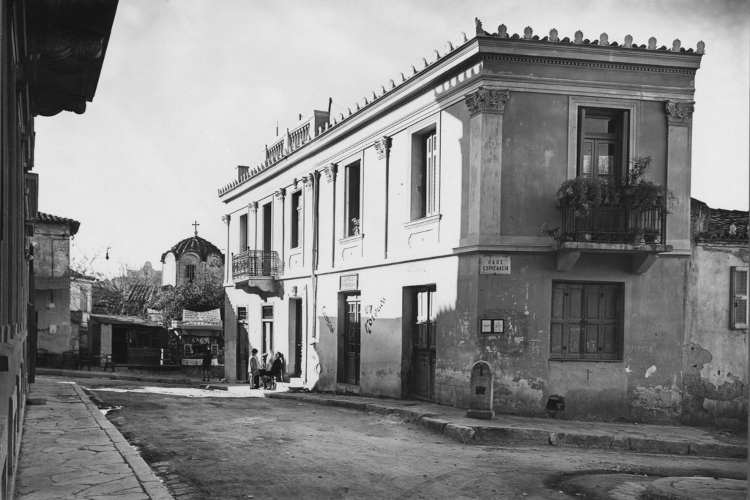 Where did Vrysaki neighborhood get its name? 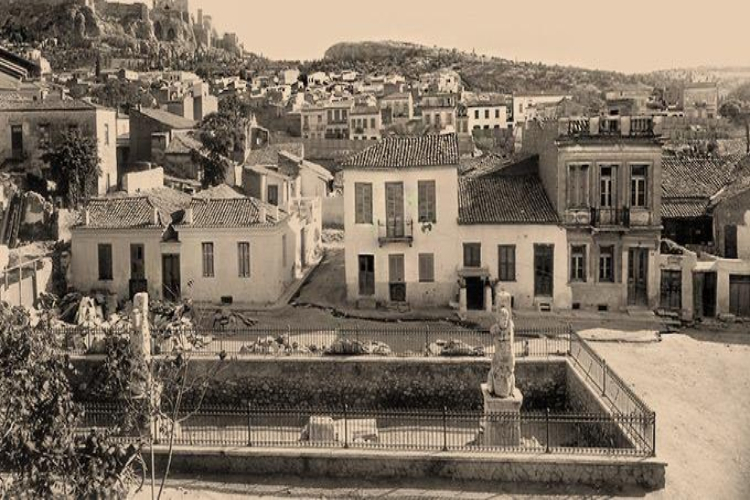 There are two versions for the neighborhood’s name. The first says that it was named after Evrysakis, son of Aias (Ajax) of Telamon, who put Salamina under the jurisdiction of Athens and was rewarded by the Athenians with the rights of the Athenian citizen initially, and was honored as a hero later. In the Ancient Agora you can see the sanctuary dedicated to him from the grateful city . The other version, which Dimitris Kambouroglou (a writer, professor and academic) supports, says that in the center of the district there was a fountain that supplied its residents with water.

Polyvios Dimitrakopoulos in his book “Jenny Theotokis: Athenian novel of 1845” writes about Vrysaki neighborhood: “”Every outdoor center had the special circle of its citizens. The Upper Fountain was for the grassroots; the Lower Fountain and the Anavrytirion for those who loved debating; The Oraia Ellas (Beautiful Hellas) inside which they were smoking and were smoked in both summer and winter, was for the company employees the elected officials, the army senior officers; Kavakos’ pharmacy was by the scholars. The Vrysaki neighborhood was only for the elegant ones”.

The chapel under the Acropolis

Walking where the Ancient Agora is, you’ve certainly noticed the church of the Αγιοι Αποστολοι (Holy Apostles).You may haveeven thought that it is a little strange how this stone church with the roof-tiles befits the Ancient Agora. But you know now. It stands there to remind us that there used to be another kind of life at this point. This chapel was probably built around the 10th century. It was excluded from demolitions due to its age and architectural peculiarities, which rank it among the most interesting examples of the Byzantine period.

Next time you take your walk to the center of Athens, the Acropolis and the Ancient Agora, bring to your mind The Vrysaki neighboorhood. It’ll be like walking by the houses and shops that used to be there. The journey through history has just begun…