The settlement that is still inhabited today

The mainland and island Greece is full of castles that count centuries of presence. One of the most important Castles in the history of the Cyclades at the period of the Venetian occupation was the castle in Naxos Chora. Naxos and its Venetian Castle in Chora take you back in time and give you an insight into the past as you never imagined it. It will catch your eye from the first moment you set foot on this beautiful and hospitable Aegean island. So if you find yourself in Naxos for holidays, apart from the beaches you will visit, it is worth getting to know the Venetian Castle of Chora. 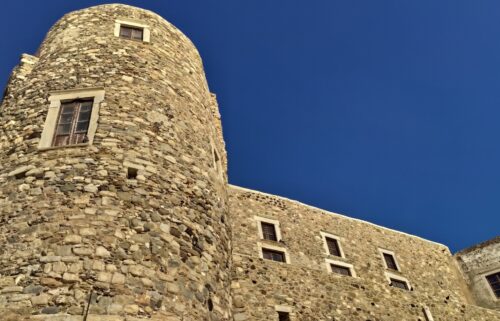 The Venetian castle in the Island of Naxos- Cyclades

The Castle of Chora was built by the Venetian Marco Sanudos, who had occupied with his companions 17 Aegean islands. He was then declared duke and established Naxos as the seat of his duchy.

The hill next to the port of Naxos forms a natural citadel. That is why he chose to build the seat of the duchy there. For the best security of the city, he used many materials that were already at that point as they had been destroyed by previous pirate raids.

A special feature of the castle is that its wall consists partly of masonry of the houses located on the perimeter of the area. The settlement of the castle was not only a place of residence of the Venetians but an administrative, educational and religious center.

In the center of the castle district is the square dominated by the Catholic Metropolis. The ruins of the central tower, according to tradition, constituted the palace of Mark Sanoudos.

There was not any access to the sea through the castle, but only through the interior of the island, for protection reasons. In the area of the castle there is a cluster of important buildings that have been landmarks for the history of Naxos. Some of them are the School of Ursoulinas, the Kapella Kazatza, and the Commercial School in which Nikos Kazantzakis(well-known greek writer) attended for a year. This building is currently the home to the Archaeological Museum of Naxos. 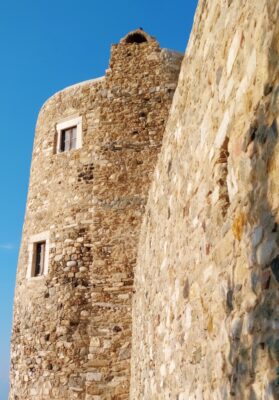 The castle is still inhabited

It is remarkable that the Castle, since it was built, has been continuously inhabited to this day. Among the inhabitants, there are still descendants of the first French and Venetian nobles who arrived on the island after the 4th Crusade. Of the supposed twelve towers of the Castle that protected it, today only one is preserved, the tower of Krispi, which functions as the Byzantine Museum of the island.

The modern inhabitants of the Castle, try to maintain their houses and some have turned their mansions into museums. The Castle of Naxos remains a living medieval museum, with a unique atmosphere. 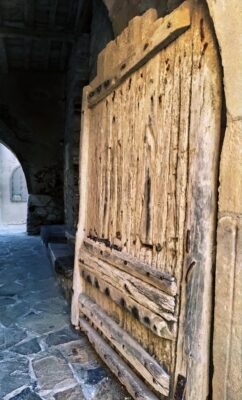 What else you can see in Naxos?

If you want to continue your sightseeing tour of Naxos, you can head to the famous Portara. It is located on the edge of the port of Chora and from there you will enjoy the unique view of the Aegean Sea. The area of the Castle as well as the sight of Portara are ideal for a walk at sunset.