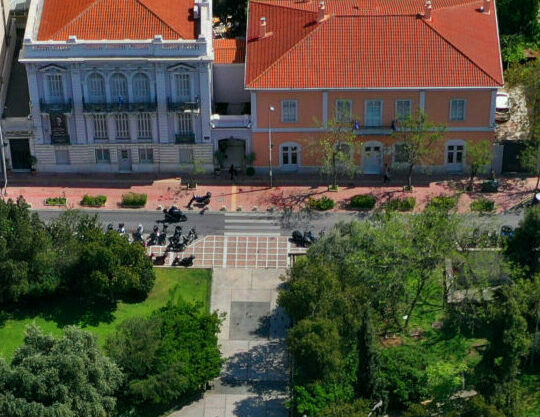 Meet the Museum of the City of Athens

The Museum of the City of Athens could only be housed in the heart of the capital. In Kalfthomonos Square. You can go by car, but what’s the point when you can move there by public transport? There is a stop a few meters from the entrance of the museum and the gas-fuelled bus will save you from great discomfort.

The object of the museum is the city of Athens since it became the capital of the Greek state until today. The exhibition unfolds in two historic buildings with paintings, engravings, furniture and other historical objects.

Before the exhibition begins, a 3D view of the historical sites of the city and its buildings puts the visitor in the mood. And the work of the French painter Jacques Karet, of 1786, cannot go unnoticed. It is the largest canvas oil painting ever made for Athens!

The first of the two buildings on 7 Paparigopoulou str, is one of the first buildings of the city of Athens after the establishment of the modern Greek state. It is known as the residence of Stamatios Decozis Vouros and dates since 1833-1834. There, the royal couple lived and it is the first palace of King Otto and Queen Amalia before they moved to today’s… Parliament.

The two buildings were joined at the behest of Otto, to meet the needs of the official palace and the residence of the royal couple. They lived there from 1836 to 1843. In the throne room, it is said that a historical phrase has emerged that is heard to this day. Otto invited people to this place for a soiree. When the fun was on, Plaputas threw his tsarouchi (traditional shoe of that time) so high, that Otto shouted at him“beware of the chandelier”. At least that’s what the legend says…

The journey through time continues by walking in the rooms of a bourgeoisie Athenian residence. The main living room of Stamatios Decozis Vouros. You can not ignore the details and not be impressed. Ceilings, furniture, chandeliers, doors, frames of a bygone era which makes you feel as if you were there.

The visit to the Museum of the City of Athens has been completed. The aristocratic Athens of the 19th century gives way to the capital of the 21st century. You get lost in the past. Until you hear the first car horn and come back to the present…

Or visit another of the city’s dozens of museums. The hidden treasures of the capital that you don’t know exist next to you.