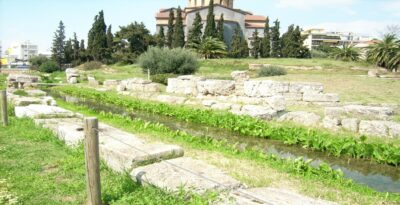 The underground river of Athens that passes the Acropolis

More or less we all know that the image of Athens today does not resemble that of the ancient times. The sights and monuments still remain reminiscent of the old glamour and image that Athens once had. As well as the rivers she had. Even next to the Acropolis. Such a river was the Iridanos. It is, in fact, the first buried river in Athens.

Iridanos, the buried river of Athens and its history

Iridanos, was a river of Ancient Athens,specifically a tributary of Ilissos. It had its springs in Lycabettos hill and crossed the ancient city of Athens going in essence from the east to the west. And it may have been one of the first rivers in Athens but its luck was not good. Interventions due to human needs wiped him out under constructions that were made over it. Today, if you are interested and want to search for it, you will find only the bed of the river, two meters wide, in the archaeological site of Kerameikos.

The damaged river next to the Acropolis

The Iridanos River is definitely the most damaged river in Athens. Most people know the suffering that Kifissos and Ilissos have suffered, but their suffering lasts only for 100 years and not 3,000 like the sufferings of Iridanos. This is the number of the years that people have been trying to settle and sub-ground him. In Ancient Athens, it sprung from Lycabettos hilland crossed the historical center while it ended up pouring its waters into Ilissos riverIridanos had the misfortune to be adjacent to the Acropolis which was first inhabited at least since 3500 BC So thoughts were made from the start as to how it could be “covered” so that houses could be built. Eventually they put him underground and turned it into a drain. The river has been buried for so many years that many people do not know today about its existence. Others, preserve and reproduce myths and half-truths about it. Iridanos led the waters he collected towards the area of Kerameikos. There was a marsh formed, since the waters were stagnated there and which was fed by the seasonal overflows of the waters of the Iridanos River.

This fact is initially certified by the writings of ancient writers such as Pausanias and Demosthenes. Then there are many stratigraphic data from the excavations since the layer of sludge and clay, which constituted the deposits of the marsh, was found perforated by holes of water-based plants (reeds) that constituted the vegetation of the wetland. The spread of the detailed deposits leads to the finding that the quagmire covered a total area of 3000 m2, with a length of 60 meters and a width of 50 meters. The level of the sea water fluctuated according to the seasonal supply of the supply of Iridanos.

Athens has many secret and unknown information that we learn by exploring it.